Contact Us
What are you looking for?
NGO / NPO

Millions of people around the world lack access to clean water. Sometimes the only water source is miles away (on average 6km) and shared with animals. Because of the latter children are often sick. In addition, the walk for water keeps them from attending school. World Vision is committed to change that. A WV Communications team decided to highlight the struggles of families that lack a clean water source using 360 video. The local Kenyan staff found such a family, the Lotuliapus family, in Kesot village in the West Pokot area. And a little five year old girl named Cheru became the symbol of this struggle.

In the fall of 2016 we finished our first 360 video for World Vision, “Defying the Beast” (improving socio-economic conditions in Central America), collaborating closely with Tom Costanza, Video Creative Director at World Vision US, and soon started work on the next one, a story about a families struggles due to the lack of clean water.
Beginning of 2017, the Koncept VR team and Tom Costanza headed for Kenya. After several flights and a few hours drive on roads that became less and less deserving of the name we reached the World Vision field office in Sook, West Pokot.
The office would serve as our headquarters during production as it was the only place with electricity to charge our gear. From here, we drove every day 3h to reach Cheru’s village. The partally washed out roads consisted of boulders, rubble and dry riverbeds. Our driver, translator, guide and good friend, Abraham (Abu) Mnangat, handled the 4-wheel drive Toyota Landcruiser so skillfully that on the return trip despite the shaking we even fell asleep. Or maybe we can chalk this off to exhaustion after long days walking and filming under the Kenyan sun.
Since Abu grew up in the West Pokot area he knows just about everyone and everyone, especially the children, knows him, not least due to his work as project manager for World Vision. He, therefore, introduced us to Cheru’s family which welcomed us warmly and graciously invited us to hot tea with milk.

The next few days we spent filming Cheru and her siblings on their walk through a dry riverbed to a place where they could dig for water. We filmed several segments with the camera on a remote rover so that the viewer could feel as they were walking with the children in the burning sun. On the way, the children encountered camels and cows also on the search for water.
After reaching a place “upstream”, the children dug waterholes in the riverbed and filled their jerry cans with the dirty water. Cheru, as the littlest, was not able to carry the big yellow containers, so she brought a teapot. While the camels and the dolly scared Cheru a little, she fearlessly defended her water hole from a thirsty cow. The way back was even more tiresome since the children were now carrying full containers.
In addition to the walk, we captured Cheru in school and at the doctor’s office. Because the water source is shared with animals, Cheru and the other children often get sick and miss school.
We always remember the warmth of the Kesot people, the curiosity of the children and the dedication for change of the World Vision teams.
With a new appreciation of the things we so easily take for granted, we returned to NYC. A couple of days later Tom joined the Koncept VR in their editing suite to shape Cheru’s story and enjoy some LIC BBQ with us. As with the first WV 360 project, the 360 video was optimized to play in World Vision’s Gear VR app.

A first version of the VR experience about Cheru’s struggles was shown at a two day church event to an audience of more than 500 people. People were deeply touched and it showed in the numbers of new child sponsorships. Compared to previous events without a VR experience the number was quadrupled. From there out, Cheru’s story kept exceeding expectations. It was also featured during the yearly 6k run, a charity event to raise awareness about the lack of clean water in communities around the world.
Although we were very happy to hear about the success of Cheru’s Story the fact that there was no immediate date to get water to Cheru’s village distressed us. The World Vision writers and photographers felt the same and so they lobbied the World Vision US president to prioritize getting water to Cheru’s community.

Halfway around the world in Western Pokot, Charles Kakiti, a World Vision water engineer, was concerned about how to make it happen. There was no suitable place for a borehole in the arid valley. Moreover, a government water project failed to reach Kesot village a few years earlier. Fortunately, village elders told him about a spring high up in the mountains. It turned out to be plentiful enough to supply the people in the valley. Still, the pipes needed to come down the mountain and cover a total distance of 10 miles. Since the road did not go all the way up to the spring, the villagers brought the steel pipes up piece by piece and helped to dig the trenches. In the valley, 13 water kiosks were established to serve as central water stations for 5000 people spread through three communities and troughs were added for their animals.
The night before the opening of the last kiosk, Charles and Abu inspected pipes and the kiosk to ensure the water would flow. The next day when the water started flowing, Monica, Cheru’s mother, and the other villagers filled every container they could find. They were afraid the water would run out. Soon however they realized that water would keep flowing and that their lives had changed for good. This was cause for celebration.

World Vision wanted to document the success in 360 as well. And we at Koncept VR were more than happy to be back in West Pokot for such a wonderful occasion. We arrived about one month after the water first started flowing and the difference in the community was tremendous. Everyone was full of energy and joy. The schools were at record attendance. The children were playing together in between classes and having a drink of water.
Charles Katiki was so kind to be our guide and lead us through dense greenery on a path no more than a foot wide to the springs. On the way back, parts of the footway were created right before we passed through. Our day long hike made us certainly appreciate the challenges in providing a community with one of the basic resources – clean water.
A big celebration at the water kiosk with dancing and singing was the highlight of our trip and is the final scene of the 360 video. We wanted to leave the viewer with the exuberance that penetrates a community with the arrival of clean water.
There was still work done on the pipes connecting a second spring to the first. This gave us the chance to see the work first hand. Starting by clearing out vegetation with machetes on steep hillsides the workers made space for the pipes and themselves. Then they carefully connected a new segment to the existing pipe.

To learn more about World Vision, visit their website. 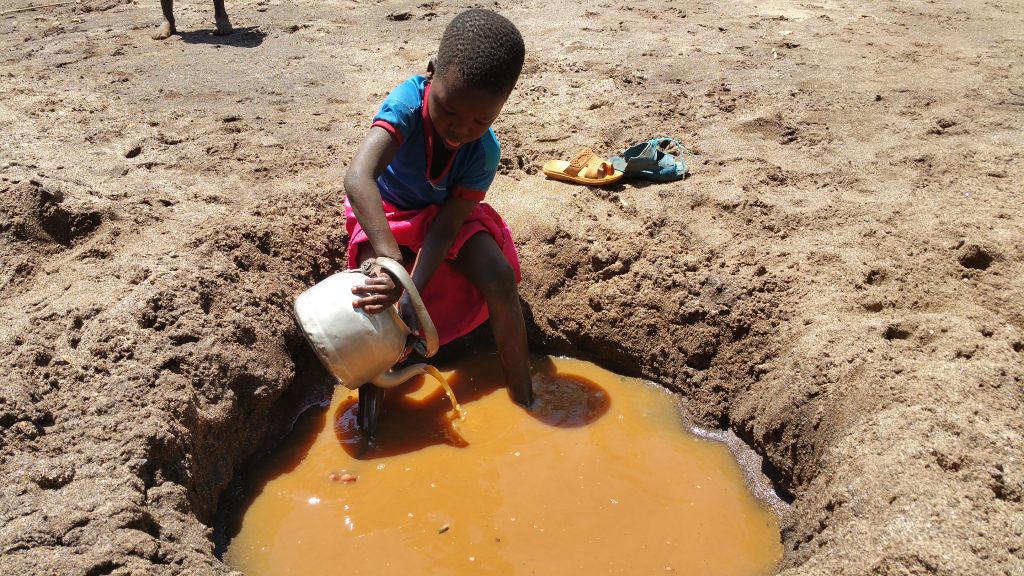 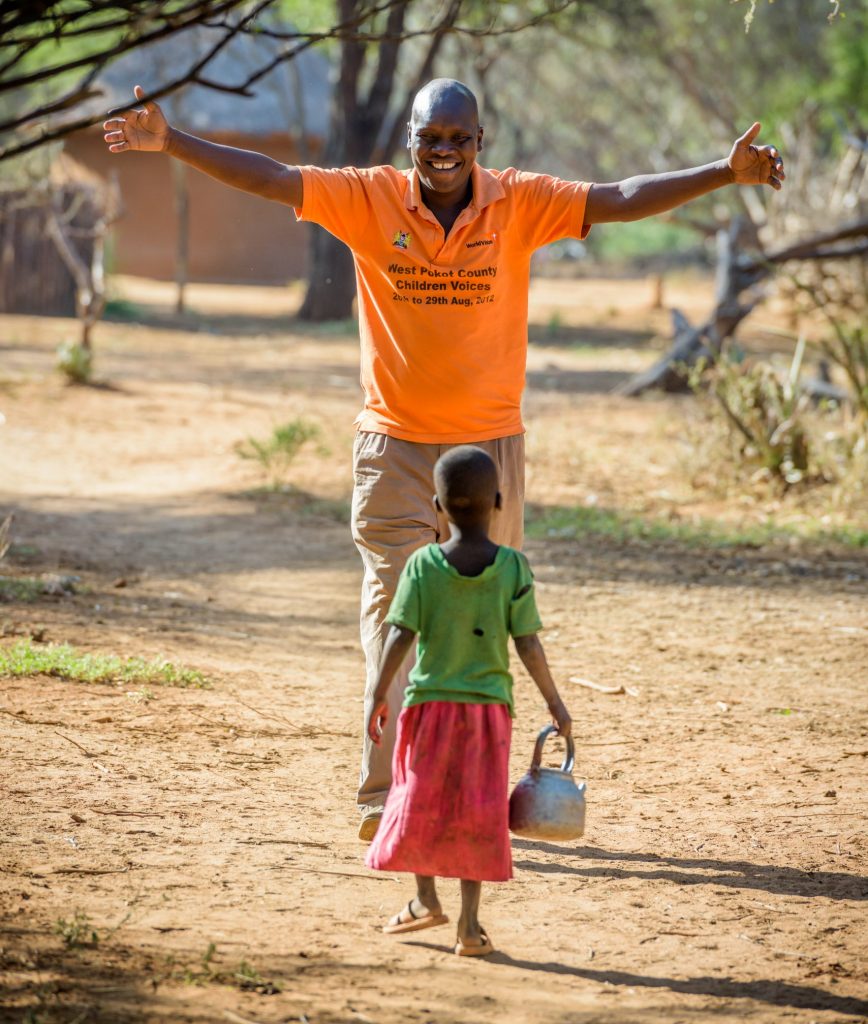 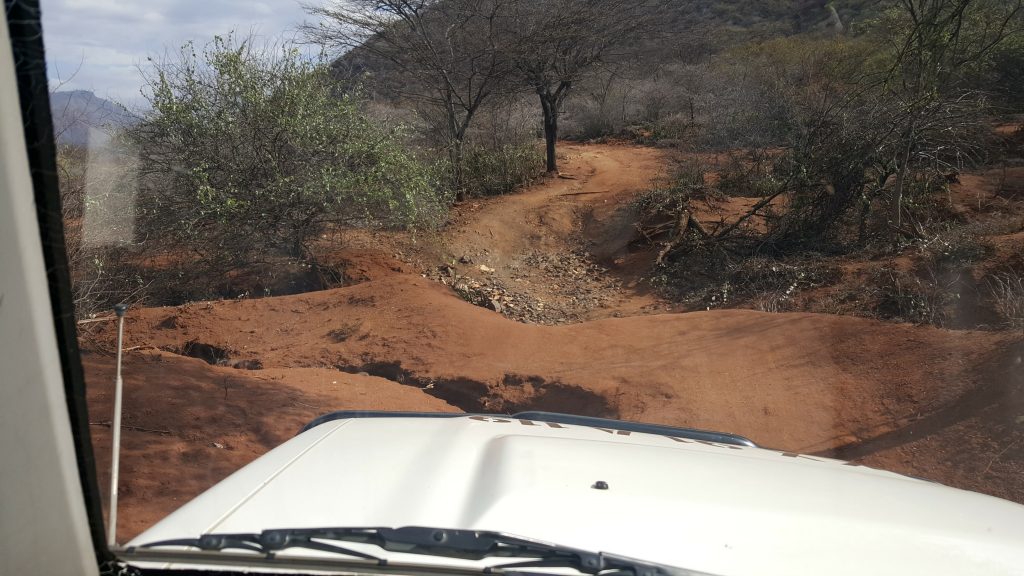 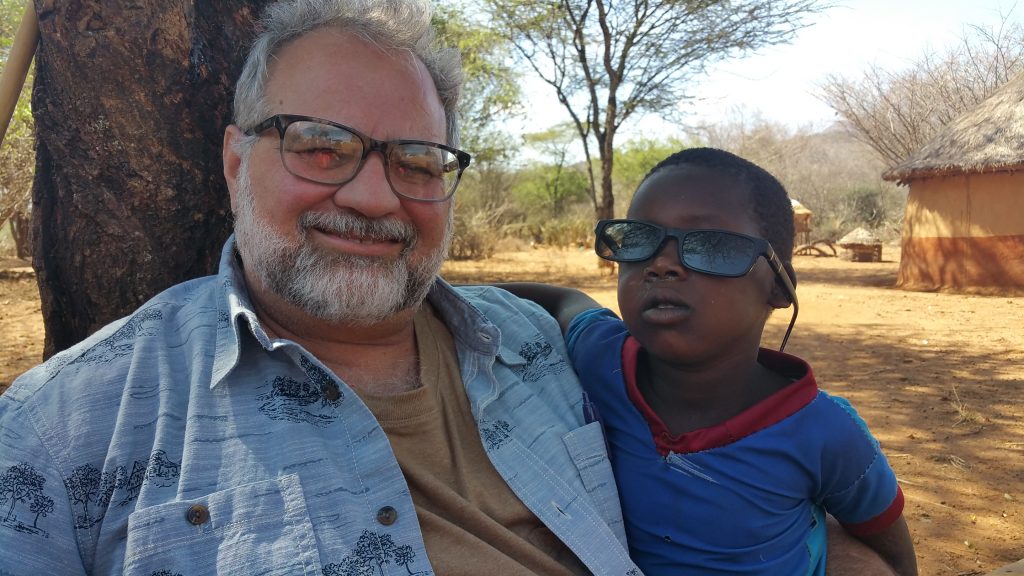 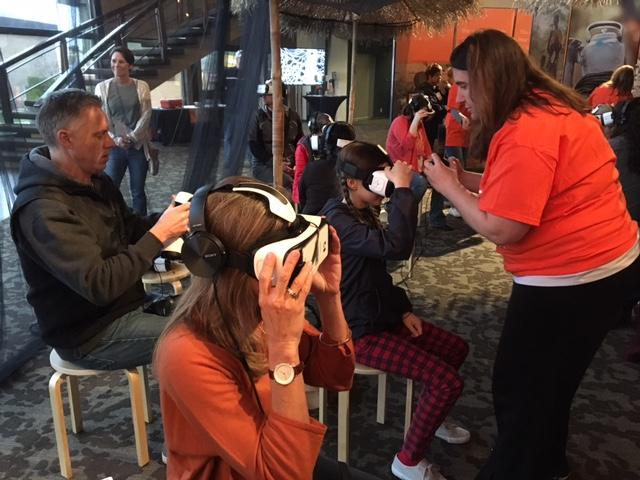 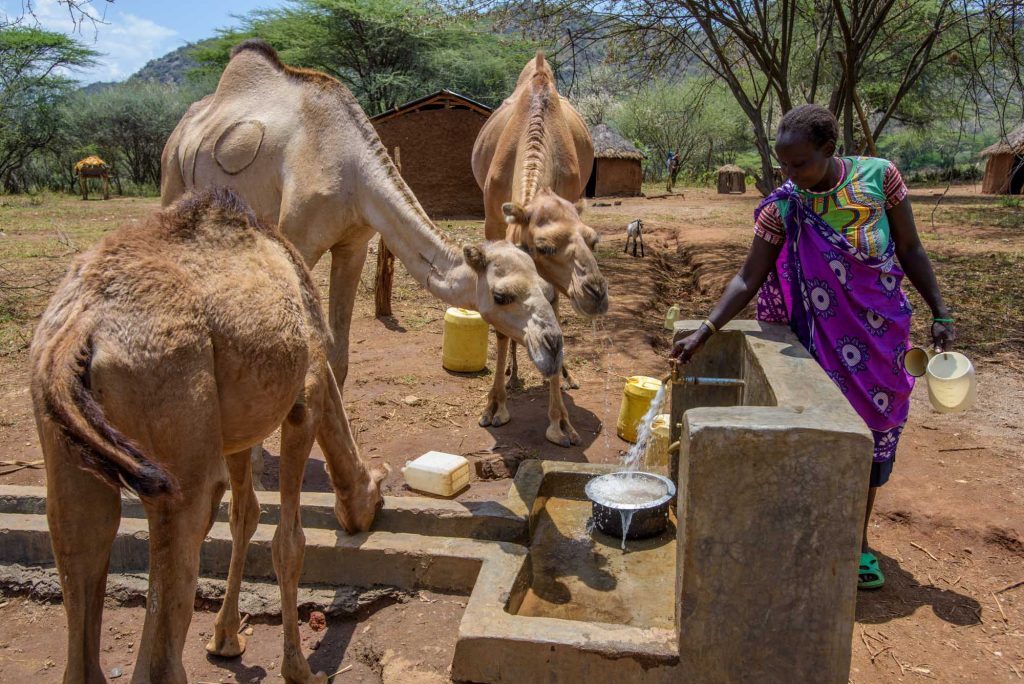 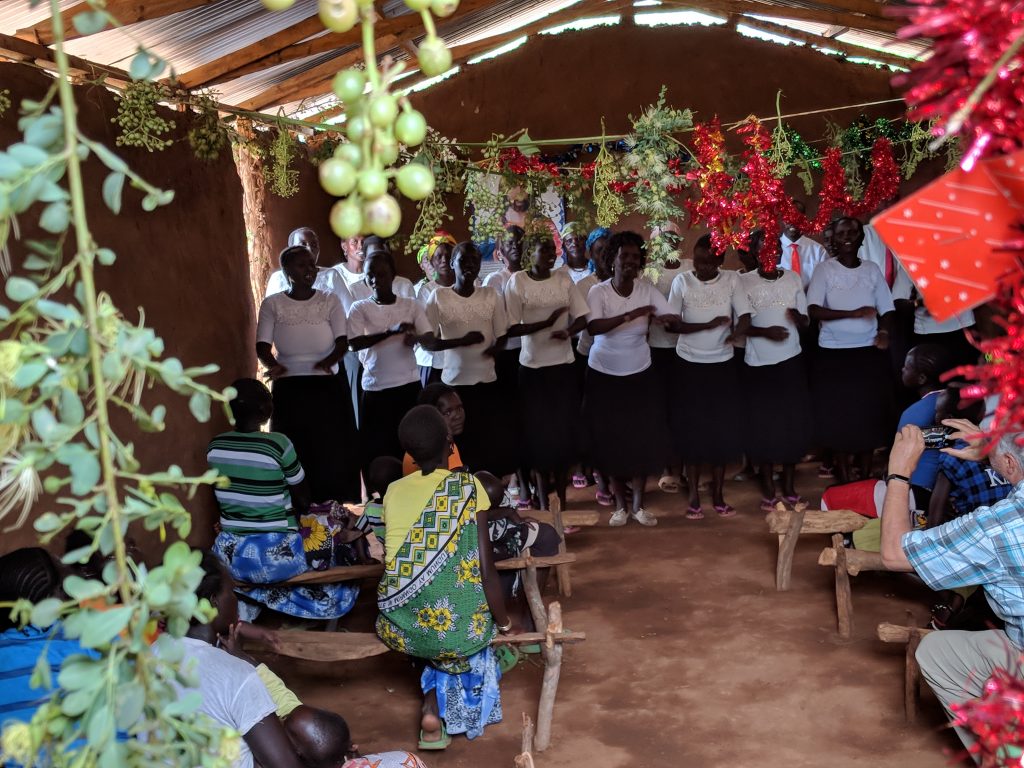 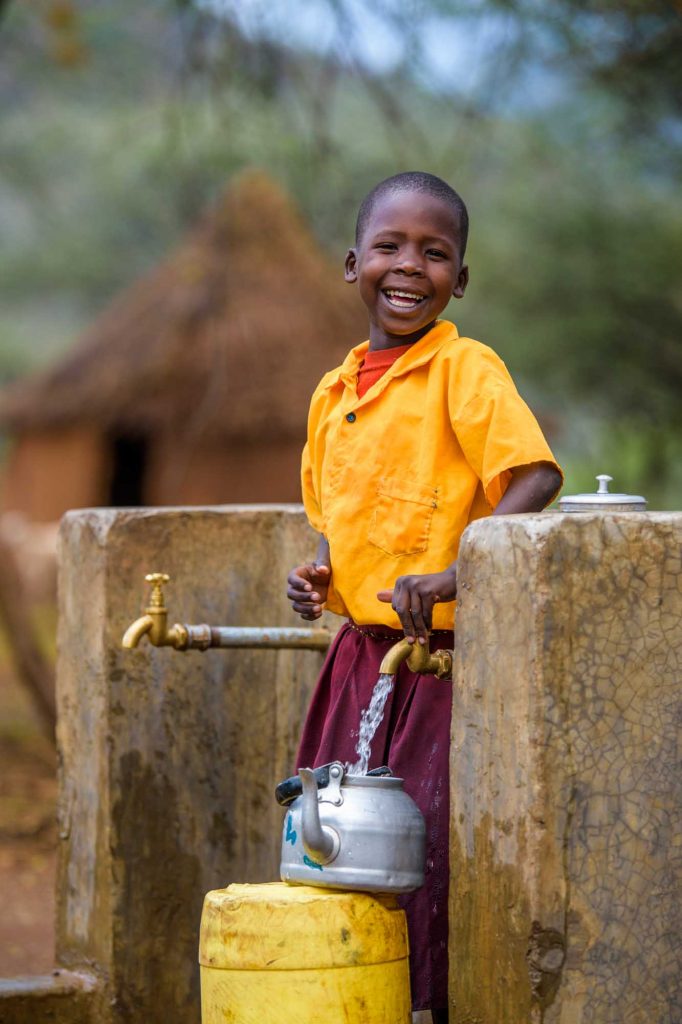 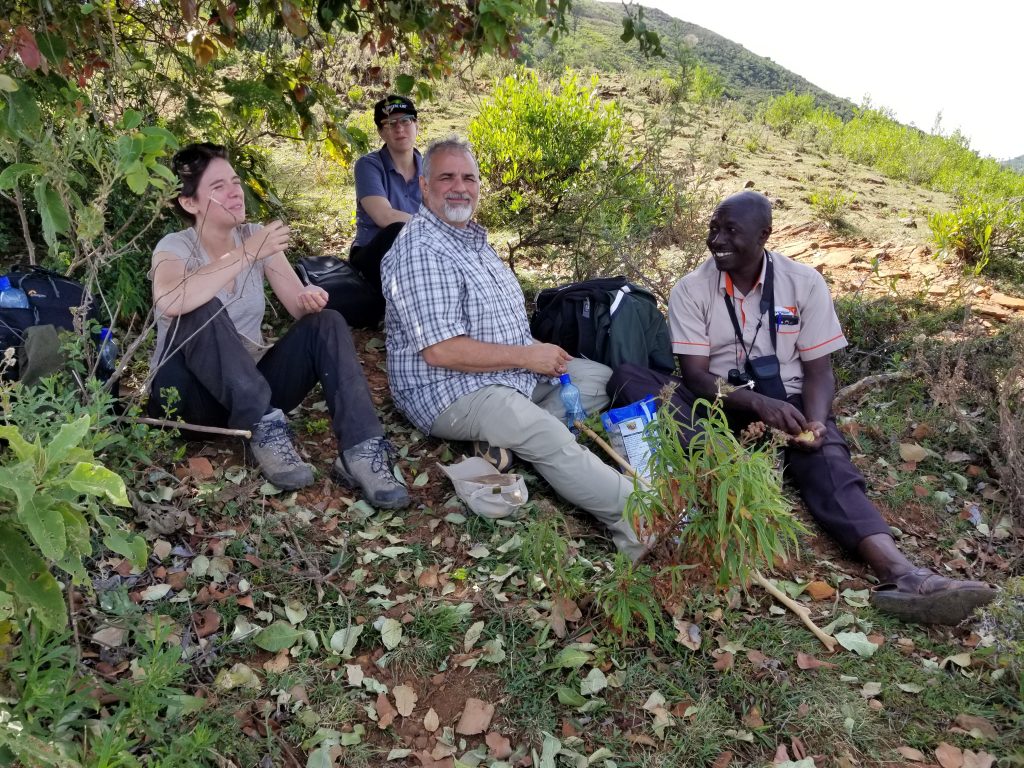 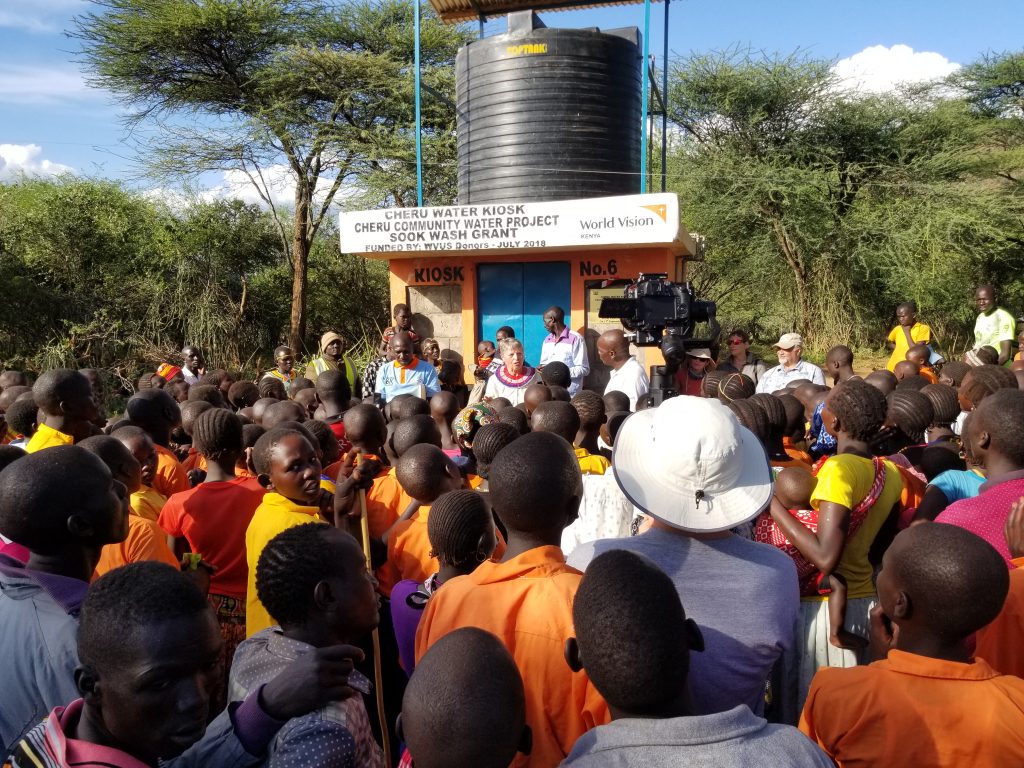